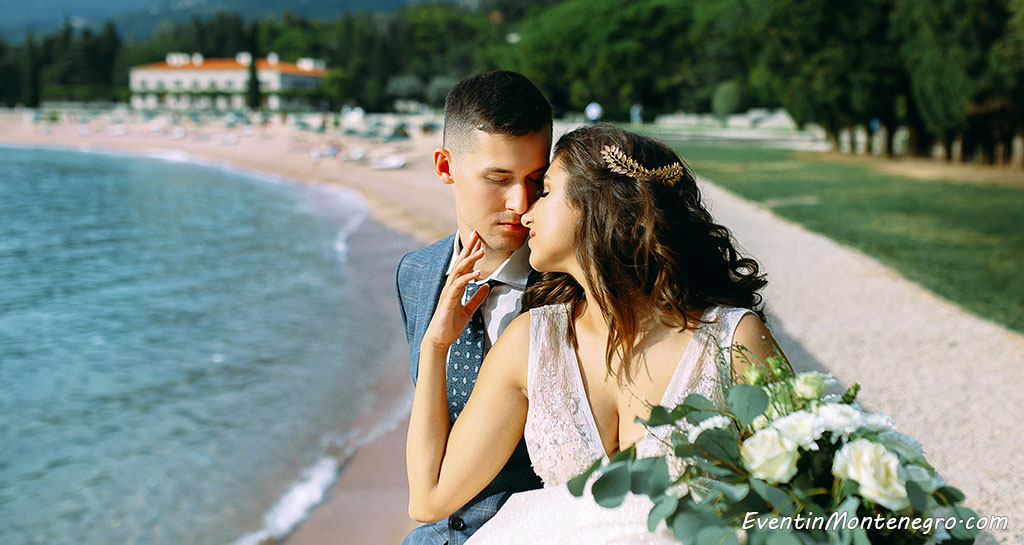 Dreaming of a wedding for two in Montenegro?

Montenegro, a country of blue sea, fresh air, high mountains, ancient temples and green palm trees. The country has a warm Mediterranean climate and the wedding season begins in April and lasts until mid-November.

Imagine that you and your loved one are in pleasant excitement and awaiting a wonderful wedding day. A day that will be remembered for a lifetime.

The place you choose for the ceremony will be special. And we will create all the conditions so that your wedding and preparation for it would be in ease and pleasure.

This will be a surprise!

Do you know how delighted this news will be with relatives and friends when you tell us that you had a wedding for two in Montenegro. A wedding, and then a honeymoon in the country of the sun, sea and ripe fruit.

After a while, you will be proud to show your wedding photos and videos to your children and grandchildren.

We understand the dreams of our customers. Therefore, we create for them a calm and pleasant preparation for a joyful day. So that on a holiday, everything was according to plan. We solve all issues (if they arise), at a time when our young people are enjoying the best day of their lives.

• Cost of services at a bargain price, without overpayments to intermediaries

• High spirits, pleasant excitement, joy during preparation and on the wedding day

• Help in choosing excursions, gifts and entertainment in the honeymoon

We know what happens when the wedding is done on their own.

Everything is not going according to plan, the photographer does not know when to prepare for shooting, interesting moments do not get into the camera.

Large penalties await those who do not have permission to engage in organizational activities in Montenegro.

The result of all this is an unsuccessful wedding.

Let us open for you the secret of an ideal wedding in Montenegro:

-first, you need to find a wedding agency in which a team of professionals works and tell in detail about your desires and ideas
- get a quote, timing of the event, script
-and more importantly, trust the organizers of weddings, be in a good mood, and have fun on a wedding day

If you are thinking about looking for the cheapest wedding services in Montenegro, making a wedding yourself or looking for contractors yourself, then only you are responsible for your choice.

If you still need our help in organizing a wedding, please check out a few facts about our wedding agency:

• Event in Montenegro has been officially registered in Montenegro since 2014. Before that, we had 7 years of experience in organizing events in Russia
• Over 13 years we have organized more than 70 different events and about 40 of them in Montenegro

• We are constantly studying the wedding market, we know all fashion trends, trends. We study 2-3 times a year to create original projects in accordance with fashion trends and innovative solutions.

• We act as experts at IWA online conferences since 2018

• We sincerely thank our couples for their trust and for the video reviews for our future customers. Links to video reviews here (there are about 30) 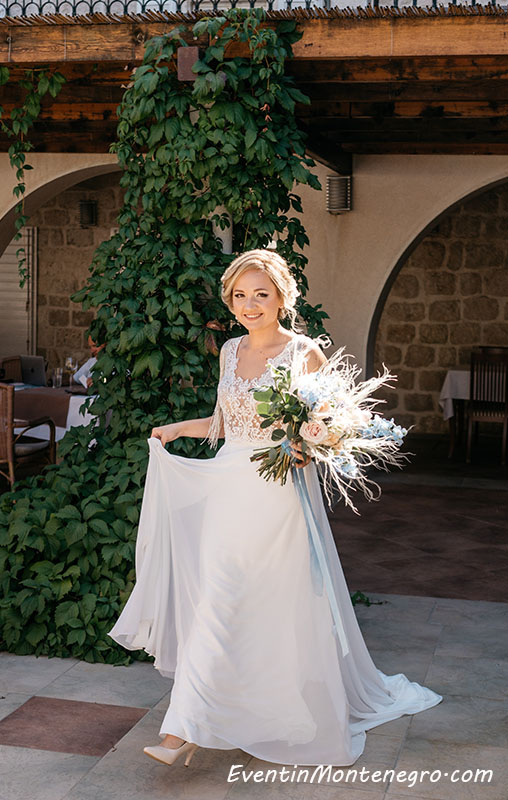 WEDDING STORIES OF OUR CLIENTS:

Story
We first arrived in Montenegro and immediately fell in love with this country. Montenegro is a country of photo wallpaper! Seriously, better than the photo on the Internet, we were thrilled. We lived in a hotel in Budva. Swam, sunbathed, enjoyed a vacation.
On the third day of this divine relaxation, an interesting idea came up to arrange a symbolic wedding in Montenegro for two in a quick way. But the official wedding was already planned in Moscow in 2 months. It was not so easy to organize a wedding through an agency; we phoned all the agencies in Montenegro. We were told the value that we did not pull. And when they found out about the deadlines, they generally said that this was not real. We had only 7 days to prepare. And we are already desperate. We are very lucky that we found your google agency. They picked up a site with a view of the old city of Budva in the new restaurant, sent a video of the site, calculated the total cost of an individual offer, taking into account all our Wishlist. At the ceremony, we were filled with tears from the beauty of this moment and sparkling happiness, emotions went through the roof. We danced to our melody and it is unforgettable.
Thank you for entering our position and organizing for us one of the most wonderful days in life !!!
Photo from the wedding https://www.eventinmontenegro.com/portfolio/svadby/aleksej-mariya/
Video review from a couple - https://www.youtube.com/watch?v=uLCORaU8ndI

We were preparing for a wedding in Montenegro for 6 months. There are many beautiful places in Montenegro, and the first difficulty we encountered was how to make the right choice. The organizers of the Event in Montenegro agency sent beautiful catalogs with venues and proposed an option that eliminated additional transportation costs and saved our time. Perhaps this is the best combination - a venue where you can hold a wedding ceremony, a banquet, as well as our stay at the hotel with guests. Our organizer Olya was always in touch, I was worried and regularly asked questions, she explained everything in detail and took into account all our whims and wishes. Preparing for the wedding is an exciting and unforgettable event.

The perfect organization of the entire wedding process, the wonderful mood of all guests and us, as well as the wonderful weather, all this turned our dream into a fairy tale in reality.

Photos from the wedding - https://www.eventinmontenegro.com/portfolio/svadby/denis-natalya/

Video review from a couple- https://www.youtube.com/watch?v=sLh2C4z80zA

We had relatively little time to prepare the wedding ceremony - only about 2 months. Accordingly, the main criteria for choosing an agency were the speed of reaction to questions (since it was necessary to quickly make decisions on all the details, conclude an agreement, make an advance payment, etc.), as well as the opportunity to satisfy our wishes and a general pleasant impression.
What we wanted:
- a symbolic ceremony together, without guests, in some natural location, preferably in the mountains
- photo session in several locations, including the Church of the Virgin in Prcanj and natural landscapes
- shooting a short video about our day
- dinner for two in the restaurant at the end of the day
I must say right away that we sent our application to a fairly large number of agencies. Just scored in Google "Montenegro wedding agency" and sent out on the list, sometimes reading reviews. As a result, we were answered by several agencies with whom we continued to communicate. With Oksana, we somehow immediately found ourselves on the same wavelength, communicated by mail and through Viber, and discussed various options. It immediately became clear that a person is determined not to “sell” as much as possible, but to make sure that everything goes exactly as we want or we can want. Oksana never insisted on any additional service, in all areas, arches, stylist, bouquet I was guided by our desires and preferences.
It is very pleasant to communicate with a person who is located in Montenegro. I have repeatedly seen with my own eyes both locations and the work of stylists and florists, in general, I know the whole "kitchen" from the inside.
Also, a big plus for us was that we concluded a contract after we formed an estimate of the event. Of course, then we adjusted and supplemented it a bit, but it was absolutely voluntary, we could completely control the budget of the ceremony and the whole day. In some other agencies, the price list was preliminarily announced to us, where the order of prices is presented, but it was easy to agree on the final estimate. This is explained by the fact that often after discussing the estimates, many couples prefer to negotiate directly with service providers and agencies lose time and money on this. Therefore, it was possible to choose only one of the proposed service packages, which later, after the conclusion of the contract and prepayment would be supplemented with various details. But we had a different situation, we had neither time nor desire for independent actions in another country, and we would like to know the most accurate price in advance.
Therefore, the choice of agency for us was obvious and I want to say that we have never regretted it.
On the eve of the ceremony, we were very worried, as the forecast was to have a very rainy day. But even in this case, our organizers have stocked up transparent umbrellas and reassured us that long rains at this time are a rarity. In fact, the day turned out to be very warm and sunny, but I am sure that rain would not spoil our mood.
The whole team worked perfectly and made this day just wonderful. It turned out a real fairy tale for two))) First we went to the city of Kotor, where we photographed and filmed in the streets of the old city. The feelings are indescribable, there are a lot of tourists around who also photographed us, applauded and loudly congratulated us. Then to the Church of the Virgin in the city of Prcanj, stopping along the way in several picturesque places. Our ceremony was a little higher, almost in the mountains above Kotor. The organizers simply masterfully managed the site, and also prepared some surprises for us: they served a small table, decorated it with flowers and candles, it turned out very unusual against the backdrop of the mountains and the Bay of Kotor. And then, when we left after the ceremony to be photographed higher in the mountains, we specially hung lanterns on our arch and upon returning we saw an arch flickering in the dark, and through it a bay flooded with lights. This idea was wholly owned by Oksana, and the cadres were just a magical conclusion to our whole day.
Oksana and Olya, thank you very much for everything, we remember with great warmth this day, which turned out to be so delightful thanks to you!

Photos from the wedding - https://www.eventinmontenegro.com/portfolio/svadby/dmitrij-vera/

Video review from a couple - https://www.youtube.com/watch?v=P2EkcJiMnjw